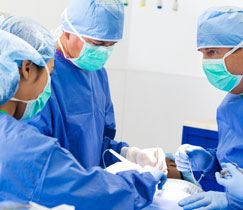 It is said that music is healing. New research suggests that during surgery, background music may have the opposite effect.

Performing surgery is stressful. One of the best ways to relax is to listen to music. It is therefore not surprising that many surgeons use music as a way to remain calm and focused during surgical procedures. But new research is showing music may lead to one of the most common surgical errors in existence: miscommunication among the surgical team.

Researchers found that doctors who listened to music during surgery were 5 times more likely to have to repeat requests while operating. A repeat request can lengthen surgery, which is always dangerous, and may result in increased likelihood of error. The study was conducted over 6 months, with findings published in the Journal of Advanced Nursing on August 4, 2015.

In a press release accompanying the published article, a senior researcher at Imperial College London said “our study shows that playing music in the operating theater can run counter to effective communication and highlights the need to consider both positive and negative effects of music on staff and patients.”

Effect of background music on surgeons a widely ignored topic

The research is mixed on whether music during surgery increases patient risk. Despite its widespread practice, the effect of background music on surgical efficiency and quality is little understood. A previous study found that closure times for surgeons increased by as much as 10 percent when music was playing. The most recent study out of the Journal of Advanced Nursing seems to directly contradict these previous findings.

It is somewhat odd that the effect of background music on surgeons is so little researched. Many jobs require silence in order to be performed optimally. If music helps a surgeon focus and relax, then surgeons should feel comfortable knowing patients will not be adversely affected. If music is distracting or causes miscommunication, that is something hospitals must address sooner rather than later.

As it stands, surgeons continue to have the option to listen to music they prefer during an operation. Hopefully researchers will continue to study its effects to better improve patient safety.

Surgical errors are one of the leading causes of patient harm in hospitals; medical mistakes are the third-leading cause of death in America. But why are medical and surgical errors so prevalent? And why is the issue not being addressed?

The lack of research into the effect of music in operating rooms is not unusual. It has been difficult for patient safety advocates to get details on when, and why, patients are harmed through preventable mistakes. “Our collective action in patient safety pales in comparison to the magnitude of the problem,” Dr. Peter Pronovost, of John Hopkins Medicine, testified before Congress last year.

It is vitally important that the medical community review standard medical practices for their impact on patient safety. While the results of one study are not conclusive, it is a positive sign that researchers are beginning to look at previously understudied potential causes of patient harm.

What to do if injured by surgical error

One of the biggest problems for patients injured during surgery, of course, is that rarely is the patient aware during the procedure. In addition, few surgeries are recorded in the U.S., meaning that if a mistake occurs, it can be difficult to pinpoint what went wrong. Hospitals can be reluctant to self-disclose errors, fearing a lawsuit and loss of reputation.

That is why patients injured because of a surgical error or other preventable medical mistake contact an experienced medical malpractice attorney. At Cirignani, Heller & Harman, our team has the skill and knowledge to discover what went wrong during a patient’s botched surgery. If there is a case for medical malpractice, our attorneys can vigorously fight for the rights of the injured patient, allowing him or her to focus on recovery while we focus on getting the financial help and information necessary to move on from the incident.