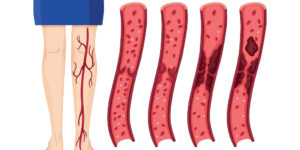 Have you ever wondered how a blood clot becomes dangerous? Generally speaking, the ability of your blood to clot is a good thing. When you get a cut, the reason you don’t keep bleeding and bleeding is that your blood has something in it that makes it thicken or “clot.” This is how your body naturally seals off a leak and begins to heal itself. Unfortunately, clots can form even when there is no cut – on the inside – in one of your veins or arteries. When this happens, the clot is called a thrombus If some or all of that clot moves to another area of the body, the clot is then called an embolus. When a clot forms in your veins or arteries, it can be very dangerous.

Most clots form in veins, specifically, the veins in the lower legs. When a clot forms in a leg vein it may completely block the vein. If enough of the veins in a leg are blocked by the clot, the flow of blood back to the heart is reduced and the blood behind the block may begin to back up. If the veins are not re-opened, the blood begins to collect, or pool. The blood has no place to go. It simply keeps collecting and collecting until it is pushing on all the muscles as well as the veins and arteries in the leg. When this happens the leg may begin to swell and may shut down more veins and more arteries until there is no room for new blood to get in or old blood to get out. If this process is not stopped, the leg will then turn blue and the tissue below the block can begin to die. The end result is gangrene and probably amputation of the leg. When this happens, doctors call it compartment syndrome. While losing a leg is, of course, a bad thing, there is something worse that clots can do.

When a clot forms in a leg vein, it usually attaches to the vein wall. After a while, a clot can break into pieces or just simply break off from the vein wall. If this happens, it will circulate with the blood through the body and into the lungs where it will become lodged in one or both of the lung arteries. When this happens, it is referred to as a pulmonary embolism. A very large pulmonary embolism can cause an instantaneous cardiac arrest. A small or moderate-sized pulmonary embolus may cause no symptoms at all or may cause symptoms such as sudden shortness of breath, bluish coloration of the skin, rapid breathing, anxiety, restlessness, chest pain, spitting up blood, or a rapid heartbeat. Most of the time if a person does not die immediately from a pulmonary embolus, he will survive unless he has a second embolus.

If an embolus is large but is not immediately fatal, the blood pressure in the lung arteries rise. The right side of the heart then has to pump harder than usual because it must overcome the higher pressure and may not to be able to pump enough blood through the lungs. As the heart works harder and harder it will get bigger (enlarged heart) until it can work no more. Then it simply stops. What makes a blood clot in the leg vein so dangerous is that it often doesn’t reveal itself until it has lodged in a lung artery (becomes a pulmonary embolus). And once that happens, once the symptoms show up, death is not far behind, at least with large clots. In other words, there is very little that a doctor can do to save a patient once a large clot gets to this stage. So, what a doctor must do to prevent death from a pulmonary embolism is to prevent the clot from forming in the first place.

Doctors know that certain conditions are commonly associated with the formation of clots. These conditions are called “risk factors.” When a patient has a certain number of these risk factors, doctors must take steps to prevent clots from forming. Some of the risks factors for clot formation include:

One of the best ways to prevent medical errors is by being actively involved in the care you receive. In the medical arena, the patient is king, so act like one and take charge of your care. If you have any of the risk factors for blood clot formation (fly a lot, take birth control, not active, etc) ask your doctor if you need to be concerned about blood clots. If you (or loved one) are about to undergo or have undergone a surgery, ask these questions of your doctor:

“Are you concerned about blood clots during or after surgery?”

“What about the fact that I’m (on estrogen; obese, older than 50 or other risk factors you possess?)”

Ask specifically what should be done to do to prevent blood clots from occurring. Some of the things recommended may include:

Regardless of what method your doctor recommends, keep in mind the following and ask questions or make demands of your doctor accordingly:

The prevention method your doctor must use depends upon the risk factors. So, if you have any doubt whether your doctor is doing enough, ask questions. Get answers or get a second opinion. Take charge of your care.