Hospitals may put patients at risk for further illness or injury 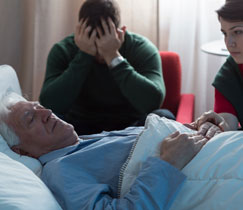 After an extended stay in a hospital, many people want nothing more than to be able to go home and recuperate. Often people do not want to see the inside of a hospital again for a very long time. However, new research suggests that those leaving the hospital are likely to have to return. A new study published in the January 23, 2013 issue of the Journal of American Medicine suggests that patients leaving the hospital are at greater risk of having to be readmitted due to a different condition than the one for which they originally received treatment.

The study’s authors concluded that those leaving the hospital are particularly vulnerable and are likely to develop complications that require readmission to the hospital. They termed this condition “post-hospital syndrome.”

Difficulties in being a patient

Researchers attribute post-hospital syndrome not necessarily to hospital errors, but rather to the strain that hospitalization can take on a person. Patients rarely get a solid block of sleep, since nurses often wake patients to take vital signs and administer medication. Patients may not get enough to eat if they need medical tests that require fasting. Lack of sleep and food can leave a person weak and more susceptible to falls, illness or infection. Patients may also receive medications that leave them disoriented and unable to follow after-care instructions upon discharge.

While all hospital readmissions may not be the result of medical errors, the study’s authors say that doctors need to adjust their views of patient care to take patients’ vulnerability after a hospital stay into account when deciding on aftercare. Health care providers should not view patients who are leaving the hospital as completely cured; rather, the 30 days after discharge should be considered the second phase of hospitalization. The authors also suggest that the health care industry should reconsider how hospitals operate in order to make patients’ stays less traumatic for them.

Hospital stays can be difficult even in the best of circumstances. When health care providers make errors, a hospital stay can turn tragic. If you have been injured by a health care provider’s mistake, speak with a medical malpractice attorney who can help you receive just and proper compensation for your injuries.