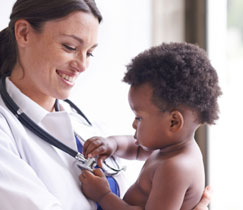 No matter the situation, be it a regular checkup or a medical emergency, when parents take their children to the doctor, they expect them to receive the very best in medical care. Recently, researchers at Dartmouth University published a report suggesting that choices made about the medical care that children receive depend less on patient need and more on physician preference.

The Dartmouth team examined data collected from hospitals in New Hampshire, Vermont and Maine between 2007 and 2010 regarding the treatment of patients aged 18 years and younger. They found that the care these children received varied widely from state to state.

For example, kids in Dover, New Hampshire visited the emergency room twice as often during the period of the study as those from Burlington, Vermont. Only half as many children in Bangor, Maine had their tonsils out when compared with data from Lebanon, New Hampshire.

This study is significant because the area from which data was collected is not particularly large. If the care that children receive is determined by need, then, in theory, treatment statistics should not vary as much as they do. It raises the possibility that some children are not receiving the care they need simply as a result of the doctor that is available to see them. Although information about possible medical errors was not part of this study, the information collected may lead to insights about incidences of malpractice.

Researchers suggested several reasons for the high level of variation in pediatric care. First, in some cases, there may not be widespread agreement about the best way to treat a particular condition or when to prescribe a particular medication. Second, in cases where surgical or imaging procedures were involved, some areas may have better access to critical equipment. Finally, in cases involving hospitalization, it may be that some areas do not have as many available hospital beds as others.

More research is needed to determine whether differences in care necessarily lead to some children receiving substandard care. Nevertheless, experts agree that further action is needed both to establish guidelines for pediatric care and to collect and publish data regarding the medical care that children are receiving. According to Dr. Jack Percelay, the head of the hospital care committee of the American Academy of Pediatrics, experts have long recognized that variations in pediatric care exist. With the publication of this study and others, it has reached the point where it is necessary to address the problem.