The Pressure is On: Medical Professionals Standing Up For Patient Rights 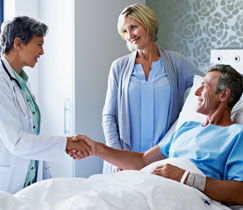 The heroic actions of two individuals recently brought the little town of Kermit, Texas, into the limelight. Two nurses at Winkler County Memorial Hospital found themselves in an astonishing situation after reporting suspected ethical violations of a doctor. Not only were they fired but also indicted on felony charges. Both nurses beat the indictments and later settled a civil lawsuit against the hospital, but the unexpected scenario has sparked public debate about laws protecting medical whistleblowers.

Anne Mitchell and Vickilyn Galle, now known as the “Winkler County nurses,” witnessed a doctor improperly encouraging his patients to purchase herbal supplements. After repeatedly ignored by their superiors, the nurses sent a letter to the Texas Medical Board (TMB). In the letter they described the suspected medical malpractice and included medical records of the patients in question. As a result, the county attorney’s office subsequently charged each of them with “misuse of official information” – a third degree felony. Too add insult to injury, the nurses were also fired from their positions.

The criminal charges against Galle were later dismissed and a jury subsequently acquitted Mitchell of the indictment. Claiming whistleblower retaliation, the nurses filed a civil suit against Winkler County Memorial hospital and numerous others, which they settled this past August.

Several state and federal laws are currently in place to protect whistleblowers, or employees who “blow the whistle” on their employer. These laws protect employees from being fired, demoted or discipline by their employers for speaking out against abuse, corruption, fraud or illegal practices. The very first U.S. federal law called the Lloyd-La Follette Act, was enacted in 1912 to protect federal employees who provide information to Congress. More recently, the $878 billion federal stimulus initiative included protections specifically for medical whistleblowers. Texas enacted several whistleblower laws, including the Whistleblower Act implemented in 1993.

If retaliated against, employees can pursue legal recourse, including job reinstatement, back pay and attorney’s fees.

The Winkler County nurses claimed the hospital fired them because they spoke up against questionable patient practices – a blatant violation of both the Texas Nurses Practices Act (NPA) and the Texas Public Employees Whistleblower Act. However, “sovereign immunity,” some argue, could have barred the nurses from recovering.

Legislation to amend the NPA to include an explicit sovereign immunity waiver was close to passing in the 2009 Texas legislative session. Unfortunately, the bill was pulled from the calendar and never rescheduled for a vote.

Donna Howard, the original sponsor of the bill, is again working on similar legislation for the 2011 Texas legislative session. Whistleblower advocates are hopeful the legislature will re-examine the issue.

Earlier this year, the Texas Nurses Association awarded the Winkler County nurses with a President’s award at the TNA annual House of Delegates for their moral courage and support for patient care.