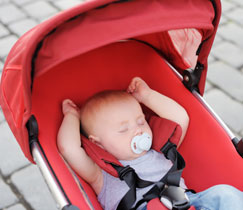 The study, published in Environmental Science & Technology, tested the toxicity of 101 baby products including car seats, baby carriers, strollers and other products marketed by major manufacturers. According to Examiner.com, 80 percent of the tested foam samples contained one of three dangerous cancer-linked chemicals: Penta BDE, a known neurotoxin banned in eight states; TCEP, listed as a carcinogen by the state of California, and chlorinated tris, named as a probable carcinogen by the Consumer Product Safety Commission.

In response to the study, product manufacturers and chemical industry groups maintain that the chemicals meet current regulatory requirements and conform to stringent federal and state fire safety directives. However, health experts say that current chemical management policy is seriously flawed and fails to protect those most vulnerable to hazardous chemical exposure — children and pregnant women.

In the May 2011 issue of Pediatrics, the American Academy of Pediatrics (AAP) reveals that The Toxic Substances Control Act (TSCA), the main federal law governing chemical use in product manufacturing, has not been updated for more than 30 years, while thousands of new chemical compounds have been introduced. The AAP charges that only five chemicals have been regulated since 1976, the year the TSCA went into effect.

Congress partially acknowledged children’s increased risk to chemical exposure through passage of the Food Quality Protection Act in 1996, a law aimed at protecting children from pesticide exposure in food. However, chemicals are still routinely incorporated into consumer and child products of all kinds with no preliminary cancer testing, which can lead to difficulty in diagnosing the cancer before it spreads.

Risk to Children Much Higher Than Previously Acknowledged

Until now, research has indicated that adults and children faced equal risks when exposed to carcinogens. However, an EPA analysis of nearly two dozen cancer studies spanning the past 50 years revealed that children are far more vulnerable than previously reported. DNA-damaging carcinogens are between 10 and 65 times more harmful to children, according to the EPA, which suggested that by age two, children have already been exposed to a majority of the cancer-causing agents that contribute to their risk for cancer. Thus, while babies may be protected from ingesting chemicals in food, they routinely breathe in carcinogens and absorb them through the skin while lying on chemically treated foam pads.

National Institute of Environmental Health Sciences director Dr. Linda Birnbaum, a leading expert on toxins, called the Duke University study “a wake-up call” that raises concerns about the neurological and reproductive effects of chemical exposure, as well as cancer. Other medical associations have also called for more research into the chemicals contained in baby products.