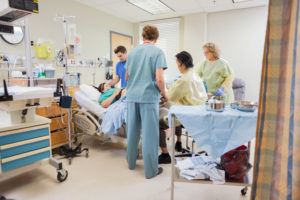 What is Cerebral Palsy?

Cerebral palsy is not a particular disease but is a term used to describe brain damage in babies found at birth or shortly thereafter. Cerebral palsy is the most common childhood disability affecting motor skills. According to the United Cerebral Palsy Foundation, almost 800,000 children and adults are living with cerebral palsy in the United States. Each year, approximately 10,000 babies are born with the condition or approximately three of every 1,000 births.

Cerebral refers to the brain and palsy means a problem using muscles.

The term describes a group of disorders caused when the pathways of communication within the brain are damaged. Thus, cerebral palsy is the result of some form of early brain injury and can occur both before and after birth while the brain is still developing.  Although cerebral palsy primarily affects muscle function, it can sometimes cause mental or cognitive impairments as well. For example, conditions such as autism, attention deficit hyperactivity disorder (ADHD) and learning disabilities are sometimes associated with cerebral palsy. However, mental impairments that occur on their own, without physical disabilities, are unlikely to be the result of cerebral palsy.

What Causes the Condition?

Because children develop at their own pace, reaching a milestone later than expected does not necessarily mean a child has cerebral palsy; it only indicates there is a possibility. Doctors will look for other signs like stiff or loose limbs and may suggest radiological tests such as MRIs, CT scans, and cranial ultrasound.

No two children with cerebral palsy are affected in exactly the same way, and doctors generally cannot predict exactly how the condition will affect your child. In less severe cases, a cerebral palsy diagnosis might have only a small effect on a child’s ability to engage in everyday activities. In the most serious cases, a child might need special equipment to walk or may not walk at all. Some children may need lifelong care, while others will be able to live independently once they reach adulthood.

It may take until your child is 2 or 3 years old to fully understand the extent of his or her disabilities. As your child’s needs become clearer, physical, occupational and speech therapy along with special education can address those needs and lead to improvements in key areas.

Many times cerebral palsy is due to genetic abnormalities or unavoidable injuries that occur during pregnancy but well before the onset of labor. However, about one-third of cerebral palsy is caused by not enough oxygen getting to the baby during the labor process. It is negligent when nurses or doctors don’t recognize in time that a baby is in trouble, or don’t remove the baby promptly (usually by Caesarian section). Sometimes negligence happens when the medications used to increase contractions is used wrongly and deprives the baby of oxygen.

Our experienced Chicago cerebral palsy attorneys have represented parents of children with cerebral palsy in medical malpractice lawsuits based on all types of physician error.

In many cases, we have discovered that doctors have attempted to hide the cause of injury, indicating to the parents that a number of different causes were to blame. For instance, they might relate that the injury occurred long before the onset of labor, that there was an infection in the amniotic sac, the baby was genetically predisposed to the disability, or some other factor besides medical malpractice caused the birth injury.

In many of those medical malpractice cases, because our physician-lawyers are well versed in all the causes of cerebral palsy, we have been able to discover what actually happened. This has allowed us to demonstrate to the jury that they should hold the proper medical practitioners responsible for the child’s disabling brain injury. If a child you know has cerebral palsy, contact our office at (312) 346-8700 today to discuss the matter with one of our Chicago cerebral palsy attorneys. We can obtain medical records and assess the facts of the case even if the child is no longer an infant.